Tag Archives: no money down

Four Ways to Buy a House with No Money Down

Can you afford a mortgage payment but are low on cash? Would 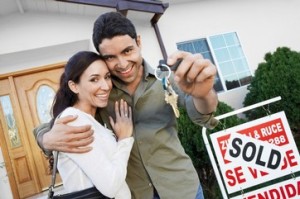 you like to buy a house now before prices and rates go up even more?

Here are four ways to get into your own home with little or no money down.

1) USDA zero down loan. The property cannot be in a highly populated city, but it doesn’t have to be way out in the country either. To check out property eligibility, see here.

2) Use a state bond for the down payment. All states have various programs that either provide the down payment or lend you the down payment with zero interest and no payment, to be paid back at the end of the loan. To check out options for your state, contact your local mortgage broker or full service mortgage lender (not big bank).

4) VA loan is zero down for U.S. Veterans. This is a nice thank you for serving our country. Most lenders offer the VA loan.

Getting Closing Costs Paid For, Too

All loans have closing costs, which include the lender fees, cost of appraisal, title insurance, and attorney/settlement/escrow fee. In addition, there are property taxes and home owner’s insurance that must be paid for upfront. If you close in the middle of the month, there is a partial mortgage payment called prepaid interest.

If you’re tired of paying rent, I encourage you to apply for a mortgage now, because interest rates are and will continue to rise, which means your monthly payment goes up. Don’t assume you cannot qualify for a home loan. Many people who feared that might be the case are now happily opening the door to their own home!

Please help pass on this encouraging news to others via social media. Thank you!

3% Down Home Loan with No MI 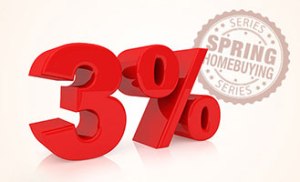 Just in time for the spring home buying season: 3% down loans.

Recently, one of the Big Banks announced it is rolling out a new program: 3% down with no monthly mortgage insurance fee.

At first glance, it sounds amazing– or does it? My first thought was, this sounds like lender paid MI, which has been around for a long time, rolled out with a new name. I’ll explain.

When you put less than 20 percent down (conventional loan), it is riskier for the lender. Typically, the lender uses a mortgage insurance company (such as MGIC, Radian, Genworth) to protect them in case you default on the loan. You, the borrower, pay for this, and you have choices.

But hold on! Will your lender, out of their kind and generous heart, pay your MI fee for you?

Sure, if you take a higher interest rate to cover it. Which essentially amounts to the same thing as option #1 above. But it sounds good, right? Lender-paid MI.

Having no MI sounds good, too. But if the loan program carries a higher interest rate, what’s the difference? Good marketing, plan, Bank of America. Put a new label on an existing program and then make a media splash.

Are 3% Down Loans Risky?

Some folks are asking if this is subprime lending all over again. As a loan officer who worked in both retail and wholesale lending (inside closed doors of an institution that provided money to mortgage lenders), and who wrote Mortgage Rip-Offs and Money Savers to warn the public about the scams and lies, I will say this is not subprime lending all over again, but it is moving the pendulum from the super-strict end of the spectrum to more leniency.

Right after the mortgage meltdown, 3% down conventional loans were discontinued. You had to put down at least 5%, and the credit score requirement became stricter. Or, you could take a 3.5% FHA loan.  (FHA promptly raised its Upfront Mortgage Insurance Fee. It was 1% and today it is 1.75%. In addition, the monthly MI fee increased.)

In reality, the 3% down conventional loan has been available again in 2014. Many lenders require a credit score of 720.

This “new” 3% down with no MI program that is rolling out by Bank of America (and backed by Freddie Mac) requires a credit score of 660. But all full-service lenders (such as Envoy Mortgage where I work) already have a 3% down loan with a credit score requirement of 620; it is called HomeReady, and it is backed by Fannie Mae. You get the five choices for covering MI that are listed above.

This gives me an idea. Maybe I should announce that there is a new loan program available, only from me, myself, and I. It’s called The Spring Homebuyer’s Special. It is 3% down and you get five choices for MI. Woo-hoo everybody!!! Call for a press release and help get my name out there, right next to Mr. Big Bank.

Many thanks to Jared, who suggested I blog on this topic.

Like Loading...
Posted in: Uncategorized | Tagged: 3% down loan, Bank of America 3% down, Fannie Mae, first-time home buyer, low down loan, no money down