Although the following story seems like a joke someone would tell at a bar, it’s actually a true story. To protect their identity, let’s call them Bob and Mary.

Bob and Mary did not get along, and eventually Mary decided to call it quits after five years of marriage. In 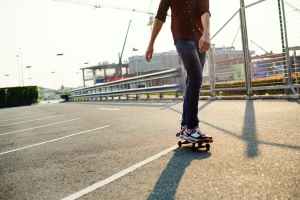 the courthouse going through the divorce proceedings, it almost seemed to Bob like the judge had a crush on Mary because things just weren’t going his way; after all, Mary was awarded the kids, the car and the house, and poor Bob seemed to be just left with the credit card debt.

Life moved on with old Bob though, and even though his was living at a Motel 6 and riding a skateboard to work, he decided not to wallow, but to better his attitude and his way of life. He saved every penny, paid off the credit cards and even put enough in savings for a down payment on a home.

After seeking out his trusted mortgage broker, Bob walked in to her office all ready to go. After listening to Bob explain his qualifications, the broker enthusiastically pulled Bob’s credit.

Lo and behold,  she saw that Bob had a 550 credit score with a string of late payments.

Bob dismissed this issue with wave of his hand as he said, “Don’t worry about those lates, because they don’t even belong to me. Those are my ex-wife’s.”

Then the mortgage broker explained that they can’t just ignore them. They are on his credit report and have affected his score.

Bob replied, “You don’t understand. I was there at the court house! My ex got everything, including the house and the car, so those don’t apply to me.”

No Bob, you don’t understand… and neither do most people…

When it comes to your credit report, the divorce decree is pretty much worthless. It does not protect you!

The creditors don’t care about it and the credit bureaus care even less. Why should they? They never agreed to the separation of debt, and they are much more likely to get their money if there are two people to go after instead of one.

Creditors are not party to a divorce. So regardless of the divorce decree, the creditors can still hold both parties responsible.

Sure, Bob could sue Mary for not holding up her end of the bargain, but suing someone who doesn’t have the money to pay their bills is relatively useless.

Bob should have separated his credit from Mary’s credit as soon as he knew she was filing for divorce.

If you know someone who is going through a divorce, make sure they see this message, because it is imperative that they separate their credit immediately. Close all joint accounts. For auto and mortgage loans, the loan will have to be refinanced to remove one person’s name from the obligation. There is no other way to do it.

A big thank you to Anthony Iacobucci, National Credit Care, for permission to post this client story. His contact info is below. He fixes credit for people like Bob–or anyone else who needs their credit restored. For DIY credit repair, this 5-star book is available on Amazon here.

2 thoughts on “What You Need to Know Before Divorce”